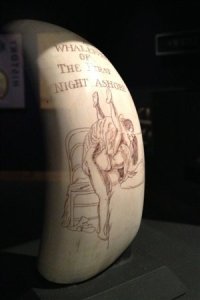 “A Whaler’s Hope of the First Night Ashore” is etched across a sperm whale tooth. © Vancouver Maritime Museum

Scrimshaw, as these etchings are called, were common in the 19th-century. They are carvings made by whalers on whale tooth or bone, using ship-made hand tools and tobacco juice for ink.In the 19th century, the two main themes depicted in scrimshaw were nautical images and women, according to Patricia Owen, curator at the Vancouver Maritime Museum.

Read more and listen to the interview